MASTER
Home
About
Get There
Tickets

The co-hosts of America's fastest-rising Web-radio show "Grand Theft Audio" (www.grandtheftaudioradio.com) - have announced a blockbuster fundraiser for one of America's top charities, the teen runaway program Covenant House California. Co-headlining the comedy extravaganza, to be held at the world-famous Laugh Factory at 8 p.m. on Wednesday, June 22, are Christopher Titus (star of the hit classic Fox sitcom “Titus, and about to debut his latest Comedy Central special, "Neverlution," on July 4) and Kyle Cease (past winner of Comedy Central's Standup Showdown for fan votes of best comedy special of the year).

Grand Theft Audio believes in doing good in addition to being funny, and that's where "Grand Theft Audio Presents The Hookup: Covenant House California" comes in. Bringing together the superstar-caliber comics "GTA" fans have come to know and love on the show with a terrific cause was a no-brainer for the co-hosts, who are eager to show their skills on the stage of America's top comedy club, The Laugh Factory.

"We know that times are tough out there, but that's when people really need to laugh the most," said "GTA" cohost Carl Kozlowski.

"And there's no better cause for Christopher Titus to help than teen runaways, a population that he helps out with every year through his own charity Project Insight," added "GTA" cohost Jake Belcher.

"But best of all, we know that people want to help others even when money is tight, so we've made this an unbelievably affordable way to have a great time while really helping some of our country's most innocent and vulnerable citizens," added "GTA cohost Brant Thoman.

"Grand Theft Audio Presents The Hookup: Covenant House California" will be performed live at 8 p.m. Wed., June 22 at the world-famous Laugh Factory, 8001 W. Sunset, Los Angeles. Tickets are $20 advance and $25 at the door, with a two-drink minimum. All proceeds go to Covenant House Los Angeles. 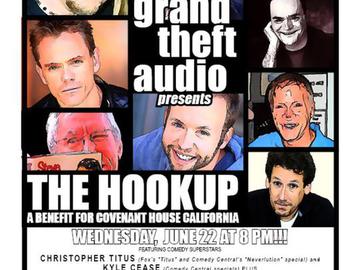 18 years & over. 2 drink minimum per person (does not have to be alcoholic)

General Admission is based on a first come first serve.

*Schedule is subject to change

other events by this organization